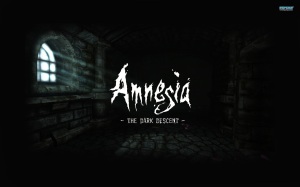 It has been just 2 days I’ve started playing Frictional Games‘ Amnesia and it has already my full attention.

(I’ve purchased it here for $8 with Limbo, Bastion, Psychonauts and Superbrothers: sword & sworcery, along with their soundtrack, both in .flac and .mp3 format)

The build up in this game evolves in such matter it gets the player freaked out just from the first paranoia strike Daniel – the main character – suffers. And funny enough, it takes (what it seems to be) a long time to some real scary event to happen.

The game-play is quite an experience, immersive as it is supposed to be for a horror game. The character goes shaky, slightly affecting his performance, as his sanity level goes down – which happens by standing in the dark too long or moving around too much without making any progression in his missions. And sometimes we don’t have a choice since we should keep the lights off so we don’t attract creatures from which we should run and hide and not much kill them.

About the sound…and music! it is more then half the experience and I challenge for battle who doesn’t agree. Tapio Liukkonen (Kaamos Sound) had made some neat recordings for the sound of monster and visions effects:

Hallucination and momentary paranoia seizures are mostly sound told, whereas the picture either goes blank or shaky, the sound conveys the story with voices from Daniel’s present self, former, or other he might hear once in a while. The voice effect with the reversed-reverb  I found a bit confusing in the beginning, in terms of what it is supposed to sound like, it may be more “scary” then expected but leaves room for doubt in our mind while playing. Also, when some part of the castle collapses, with the help of the trembling during game-play, the very low sound effects very well mixed, intelligible all the time. The sfx in the water were quite unexpected, very powerful, and my bpm’s were almost instantaneously running up, I lost focus and had no idea what was happening until I died and had a death hint. Even moving further and knowing what caused that sound to be triggered, whenever I needed to go through the water or fell in it it was easy to panic and thus loose orientation.

There is some sort of question and answer between some elements in the game, visually and sonically, for example in the rooms where there is a piano (you can open it but not play it) you start hearing it being played moments after you just left for checking another room, and then you remember there was a sound strike when you first had it open.

Not infrequently, Daniel hears human (in whatever state of humanity that is) moans and slow footsteps on squeaky wooden floors (I never really figured out  if they were mind-tricks or whatever, sometimes it seemed to be no reason for hearing them in such lucid listening…), a thing you will never ignore but it may lower your attention on it, until the first creature makes its appearance, screaming its loans out and it is highly recognizable as danger. Then, the silence, even though it is still there…

The audio programming of objects colliding works well more then 90% of the time and it provides a variety of textures that completely fills the visual expectations and it is always very well balanced between music and Daniel’s sounds. Along with the whole sonic experience balance, this is where it stands out, the results of a good engineering (Jens Nilsson).

The music was written by Mikko Tarmia, with nice sound elements like some sort of wind moans with underlines melodies made from some sort of deep low voices; the instruments used were samples: strings, choirs, church organ, (Theme for Unknow). The music is almost always present and it never gets too much.

Here is a short and nice review on the sound of the game along with more topics :