Well… this is a blog, right? I need to unburden a little.

This year has seen so many up’s and down’s I felt sick many times. When it seemed that my career as a sound designer was kicking in, I got a punch in the face. A heavy one. But I am kind of glad it happened.

For someone who knows me or has read the “About” section on this blog, got it that I eventually got sick of music production and at some time during my degree I completely turned for sound design. As I say, I like a lot of things about sound design, but when I got the chance to work on a 1st person shooter game, even though it was a student project, I got hysterical and started to mind-eat everything I could about the subject. I got familiar with Unity, I learned how to do lots of stuff on Fmod, and eventually learned related audio game things. Also found out insanely talented and dedicated people on the web and started to follow their work (go to “Great Sites”). I gather a composer to work for us as well! I was extremely excited! Months later, the game designer quitted the project and nothing was done.

Later on – this was 2011 -, I was introduced to this cool game designer team that would need a sound designer sooner or later in the game company they were working for. I knew almost nothing at the time and so one of them told me they did enjoyed my work but it had more to do with attitude and what I could bring to the company. What I had on-line at the time was some really-bad-audio-quality creature’s roars, but nonetheless they were fun; I also had some posts on a previous blog, including a simulation on Fmod Sandbox. But what I truly had at the time was a willingness to learn more and more, enthusiasm and an extreme confidence (not arrogance). I was always making up projects to test myself and involve other people that could be potential work-buddies.

I got into projects that were a piece of crap, for better or worse; about half of them didn’t even go until the end. But still, I learned; and not only about audio but also about people.

In the end of 2012 I did sound design for Apollo, at the SoundTrack Cologne European Talent Competition and the entry was nominated in 12 between some 90 contestants.

Meanwhile, 2013 was looking great: I actually chose my salary at the game company (yes, what a luxury, right?), the guys seemed awesome, the game was fun and I noticed that with time they were more getting slightly open to new audio implementation ideas, and I was also better understanding their work. I was attending a Game Design course and for that I learned to implement audio in UDK all by myself.

In April I worked on a featured-film, one of the most valuable professional experiences I had so far; in May and June I dialogue-edited two short documentaries. In October I got back to a featured-film again, with a little more responsibility and earning a few bills, between other small audio services that got me that monthly safety net.

When all of a sudden, I was called in for a meeting in the game company to hear I had been replaced.

Replaced with SFX packs. My work was “positive”, but they could save so much buying 400 sounds for $10 that it just seemed an obvious choice.

From that day on I entered a dangerous spiral of depression. I questioned every little thing about my work, victimized me all the time, lost all the confidence about my skills, and was almost about the I-hate-myself-I-wanna-die thin 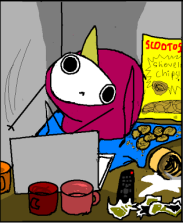 There were a few days when I tried. Despair and financial insecurity were making me build profiles online on freelancer sites. I saw some familiar faces there making good money. Oh yes, I lived in Portugal until this year, for the ones reading this who don’t have a clue: this is a very very poor country going through a dangerous crises both economic and mental.

I accepted to work on something for free. It was a more or less okay experience, but I don’t advise anyone doing it when there is possible income and you are simply offered your name on the credits and one more thing in your portfolio. Nevertheless, I assumed a compromise.

A few days later someone showed interest on my portfolio and wanted to hire me through one freelancing site to design some sfx for their game. I was selling my work so cheap hoping to get something fast, that he / she wanted to lower the price even more, even after me sending 3 particular sfx as a sample.  I refused his ridiculous and offensive price and never heard from her again.

Then I was down. I was even doubting my own dignity, something that I never did and always felt very confident and secure about.

Between some friends reacting like I was a child that got a bruise: “It’s ok now, you’re a good girl, everything will turn out just fine; here’s a candy.”

But… I gave it a lot of thought and I came to some conclusions.

I almost completely accommodated myself to this game company; I stopped blogging, researching, learning and putting my efforts on audio things.  Well, of course I was doing that but not with the same enthusiasm and drive I had when I was “starting”. I also rarely looked for other companies that could have my contribution. I didn’t give a damn to freelance sites. I used everything as an excuse. Now I’m busy, now I’m tired, now I have to watch this episode. I lost the sense of my goals and of what I wanted for myself.

Now, at this precise moment, it’s not that I earned a job or won the lottery so I can buy all the equipment I want. Nothing around me has changed. Eventually, I realised that these things take time, that I was a lucky one to get hired after two months of playing with vocoders, and that I should had never let things just go and flow. It doesn’t hurt to dream as long as you go after it and make a plan. This actually helped me a lot with that.

I remember during my professional hysterical phase the satisfaction of learning something new and getting a like on my blog’s page was more than enough. In fact, I rarely had in my mind “now I will get an audio job soon”. The feeling of acknowledging something new is great as long as frustration doesn’t overcome that feeling. Yes, it’s hard most of times, but we really need to be patient.

This situation (and I still think it’s a crap to get replaced by sfx packs, but it’s not my problem any longer) got me back into my roots, so hello world!

And since it’s Audio Oprah time, share your experiences with this as well. 🙂 Or an audio job for me. I’m kidding. No.